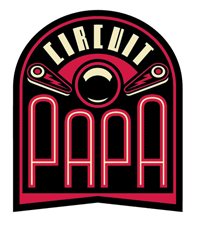 We are pleased to announce the 2013 PAPA Tournament Circuit!

Like last year, the 2013 Circuit launched at our very own Pinburgh 2013, and will conclude with a special Circuit Final the day before Pinburgh 2014. Each Circuit event has the same predetermined value and the system will remain unchanged throughout the year, with updated standings appearing here after each event. The reigning 2012 Circuit Champion is Daniele Acciari, and the current points leader is Keith Elwin.

An introductory overview is available here, as well as the complete official rules, the schedule for 2013, and a detailed FAQ to answer your questions.

We'll see you at the arcade!